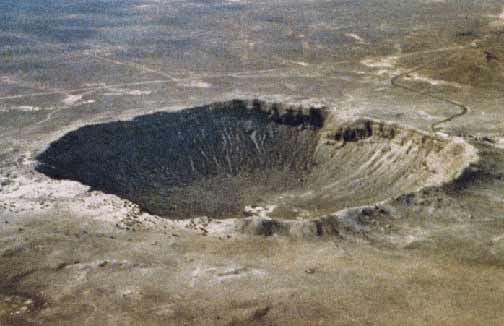 Today, we are continually hearing about the space flights (spacecraft, satellites, etc.) of objects which are sent into space from the Earth, and we can all too easily forget that "flying objects" from space (meteoroids) have been landing here on earth since the beginning of time. Many of these are very solid spacecraft indeed, and their landing is sometimes so powerful that it exceeds the effects of an atomic bomb.

Meteoroids entering our atmosphere are commonly called "shooting stars" or meteors. They are arriving all the time, but we usually only see them as a beautiful frictional firework display in the sky of a clear night. Bigger, but rarer, meteoroids may penetrate through to the surface of the earth, shedding droplets of molten skin along the way, and sometimes exploding either at impact or along the way, but finally coming to rest in the soil, where in time they will merge with earthly rocks through weathering. Those that reach the surface are called meteorites.

In Canyon Diablo in Arizona, USA, you can visit the best preserved meteorite crater on earth. It was formed about 22,000 years ago by the impact of a giant metallic nickel-iron meteorite, which arrived from space at a speed of about 50,000 kilometers per hour, and weighed many hundreds of tonnes. Friction with the atmosphere does not appreciably slow such a mighty mass, which smashed into the solid earth, punching away 300 million tonnes of earth rocks in a mighty blast which left a crater which even today is still 1.5 kilometers in diameter and 170 meters deep.

Many of the nickel-iron meteorites being offered for sale today, are from this or quite rarer crater sites in various parts of the world. The price of such specimens is much less than the price of gold, although they are in reality much rarer to find than gold. In the whole history of the world the total amount of meteorite material ever discovered is only about 300 000 tonnes. This includes big lumbs like the single 60 t Hoba Iron Meteorite in Namibia. Although stony meteorites are the most common kind which fall, they also are the most difficult to find as they tend to look quite like normal earth rocks. Nickel-iron meteorites, due to their distinctive apperance, and very considerable density, are the most commonly available meteorites of all. The discovery rate for stony meteorites has been, until recent years, about 10%, compared to iron meteorites at 86.5% and stony-iron meteorites at 3.5%. Starting with the end of the 90th, when nomads in the Sahara Desert started looking for this 'rocks from heaven', a considerable amount of new meteorite finds, mainly Chondrites but also some Lunar and Martian Meteorites, have entered the market. 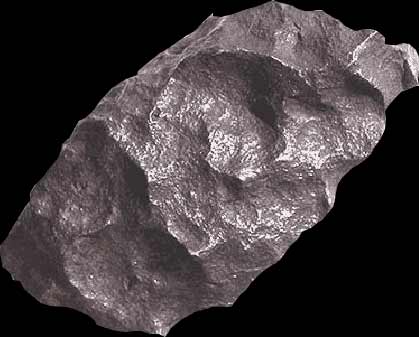 Current Theories suggest that the Solar System began as 'primal materia', a cloud of hot interstellar dust and gas, a so-called 'solar nebula' from which the very first stages of planets condensed as droplets of liquid rock. Stony Meteorites most often display a texture of rounded complex rock intergrowth, called chondrules ( from which the meteorites are known as 'chondrites'), and this texture may be a relic of early condensations from the original solar nebula. The universe however is much older still, and according to astronomers, if everything did begin with the "Big Bang", it was probably about 12- 15 billion years ago. A few stony meteorites also contain appreciable cosmic carbon and amino acids, from which all organic life on Earth may have originated.

Iron Meteorites probably also represent the best sample we can get of the core material at the centre of our Earth. Gravity measurements tell us that the core is very dense, and magnetic measurements suggest that it is made of iron. Although very hot, it may otherwise resemble the composition of iron meteorites which were originally a part of the core of asteroids between Mars and Jupiter. The metal of the meteorite is crystallised internally in a beautiful criss-cross array, known as the Widmanstätten Pattern (named after the discoverer, Austrian Count Aloys von Widmanstätten) which is unique to iron meteorites, and develops because of how it formed inside the heart of an asteroid. It actually consists of inter-crystallisation of two metallic minerals, kamacite (which is virtually pure iron) and taenite (which is an alloy of iron with nickel), which is believed to only form in an environment of zero gravity and a coolung rate as slow as about one degree per million years. Such evidence is proof positive that iron meteorites have come from space, and they are definitely something that humanity will never be able to duplicate. At one time iron meteorites were the only accessible form of iron on Earth, and showed our ancestors a desirable material to discover.

You can watch regular meteor showers, when cosmic dust and tiny stones plunge into the Earth's atmosphere, at predicted dates, producing spectacular displays of 'shooting stars'. The meteor showers occur when the Earth, in its orbit around the Sun, intercepts debris left behind from the tail of a passing comet many years previously. Arguably the most famous and readily seen southern hemisphere meteor shower are the Leonids, which can be seen between November 14 and 21 each year, and the Geminids, between December 7 and 17 each year. The showers are named after the constellation of stars from which they appear to originate, being Leo and Gemini in these two cases. In the northern hemisphere, the Perseids between July 17 and August 24 is well known. The incoming debris from a meteorite shower can strike the upper atmosphere of Earth at speeds up to seven times that of a rifle bullet, and is considered a credible risk to orbiting manmade satellites. These 'Shooting Stars' remind us that our Earth is not alone, wandering around out there in the seemingly infinite volume of space.

We hope you have found this summary interesting, and caused your to consider the strange things that may be happening out there in space above our heads. Perhaps you will want to own your own piece of a meteorite, a truly heavenly rock, which is the oldest solidified piece of matter any of us could ever own, and far and away the most ancient thing we could ever add to our rock collection.

Here one comment about the educational value of meteorites:

Meteorites are educational because they hold the unknown knowledge that humans strive for in life.
Since the time of recorded history the " Heavens " have been observed. Man has formed societies and ideologies based on the stars. Religions have linked themselves to these " Rocks from Heaven "( Ark of the Covenant).
So many questions we humans have about the universe and what part we play in it. Meteorites are a link to our past and a possible bridge to our future. They stimulate our imaginations and fortify our need to explore. Meteorties are the seeds to understanding how life came about and what role we as human beings will play in the universe.

Meteorites have been and will always be educational to anyone who just looks up!