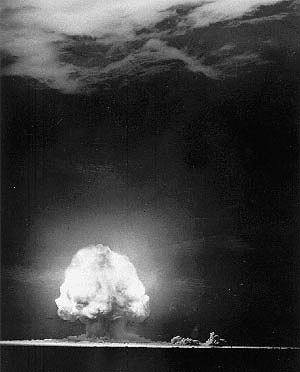 This material offered is intended for scientific studies in institu-tes and museums, for educational purposes and, as a rare and special reminding specimen of an event that changed our World, for the advanced and serious mineral collector.

The purchaser is responsible for safe storage and handling and acknowledges that he/she is 18 years old or older. Under no circumstances we will be held liable for consequential damages connected with your purchase of our Trinitite!

Trinity Site is where the first atomic bomb was tested at 5:29:45 a.m. Mountain War Time on July 16, 1945. The 19 kiloton explosion not only led to a quick end to the war in the Pacific but also ushered the world into the atomic age. All life on Earth has been touched by the event which took place here.

Included on a Trinity Site tour is Ground Zero where the atomic bomb was placed on a 100-foot steel tower. A small monument now marks the spot. Visitors also see the McDonald ranch house where the world's first plutonium core for a bomb was assembled. The missile range provides historical photographs and a Fat Man bomb casing for display. There are no ceremonies or speakers.

Trinity Site is open to the public twice a year--on the first Saturday in April and October.

In deciding whether to visit ground zero at Trinity Site, the following information may prove helpful to you. There is still Radiation existant.

Radiation levels in the fenced, ground zero area are low. On an average the levels are only 10 times greater than the region's natural background radiation. A one-hour visit to the inner fenced area will result in a whole body exposure of one-half to one milliroentgen. 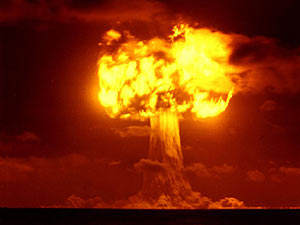 At ground zero, Trinitite, the green, glassy substance found in the area, is still radioactive and must not be picked up.

Trinity is located on the northern end of the 3,200-square-mile White Sands Missile Range , N.M. , between the towns of Carrizozo and Socorro , N.M.